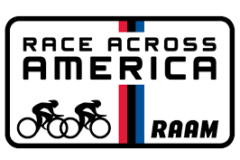 We arrived to California a week before the race. Beautiful days for me. Michal watched me as mental coach. Relaxation, regeneration, massage, stretching, yoga on the beach and workouts on the RAAM route. My thoughts were only in the race. I knew that all other things are covered by the team led by Jarek who planned all very well. On the start line I stood fresh, but focused.

At the beginning of the race my dreams came true. There were the joy and thankfullness in my head, because everything went according to 8-year-plan. Now there was the time for 12-day-implementation. Before the race I had the fear, that I will ride too slow, that I will have short breath at high altitude, that the heat on the desert will beat me or that my neck will fail again. The fear evaporated during the firt miles of the race. It was a good mental job, because ofcourse something could go wrong, but evil thoughts did not interfere with my driving.

There was no fear that I will not reach the finish line before 12 days. We had the plan. We analysed detail results of four riders who finished solo category in 2013 just before 12 days and entered data in our race application that used the crew in the pace car. After each of the 55 time stations I knew how much profit or loss I have comparing to virtual „racer” on the map. Usually it fluctuated around plus / minus an hour, two hours. It was under control. Hence, It gave me a sense of peace.

Despite it, there were moments that heralded the problems. Mostly it was about the weather, which shows as storms and rain at the end of the tour. I was also carefull not to go too long in wet clothes, which could lead to hypothermia and disease. Fortunately, nothing like that happened.